The flow of various situations, reeling speed and rod action do not jump to the surface of the water.

Inviting a bite by "inertial slide" that shifts to a slow-moving, slow-moving region that occurs between actions. 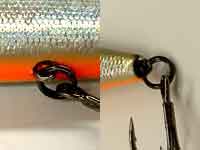 Unlike floating, which relies on the water pressure received by the lip on the lip, the heavy sinking has a dive ability in its own weight, and the depth can be controlled at will by the action, rod angle, and reeling speed.