This is a world that ordinary floating and sinking minnows do not have. In the case of an existing minnow, use a twitch etc. to repeat movement → stop → movement → stop. At the time of "stop", it tries to regain its posture by buoyancy (there is buoyancy to regain posture even in sinking), it does not move forward, and as a result "stops". Due to its own weight, D-CONTACT twists while trying to rebuild its posture by the law of inertia. This is the inertia slide. After that, it shifts to the slow speed area.

style of catching a river that does not jump out even with a twitch in cross down, the frequency of down cross down cast is less than 10%, but there are situations where it is necessary to do so at some places. . D-CONTACT has been developed as a minnow for fishing, using a lot of upstream cast, directing trailing hitting by twitching, twisting slide action in jerking, and twisting. However, in that case, the minnow that focuses only on the upstream cast will have no field feeling. Due to its nature, the sinking minnow has weak points in reverse pulling twitch, etc., but the potential of D-CONTACT is unchanged from up, cross, down. No need to change to floating when down.

3. Range control is possible Because the

weight is quite large, the falling speed is fast and you can aim at the deep field. It can be used in various ranges depending on the retrieve, the spacing between the twitch and the twitch, and the position of the rod tip.

50mm, 63mm, with any type of 72mm, slightly because of the rear fixed center of gravity, great flight distance can be obtained, which far surpasses the conventional size of the lure without blurred. You can appreciate the weight of the headwind when there is a headwind.

a. Appeal by visual shape change The

thin body and the "shape" shape are designed to make the target fish notice a big change with a slight flat and rolling. When the target fish looks at D-CONTACT from the bottom, it looks thin, thin, or weak, but the shape changes sharply when rolling, making you aware of the change. 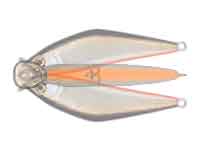 Different holograms were put on the mask and body to give a presence in water. Considering both natural and attractor coloring, this lineup focuses on practicality. For example, TS and TS laser have different reflection efficiency in water. So is Yamame and Yamame Laser.

c. Black ring and hook specifications that take advantage of the lure's glitter.

Achromatic black finish except for the body. The hook is a Kaken specification that sticks quickly.